Silvia helped the authors of the Guide, LGT Philanthropy Advisory and Philanthropy Insight, to structure and finalize the publication. The Guide is cause-neutral and is for those who want to use their resources to have a positive impact in the world. It features 30 leading philanthropists from around the world who share their personal experiences of supporting social or environmental impact.

This document, which Silvia co-authored, outlines Co-Impact’s observations on global philanthropy that help to explain why systems-change philanthropy is not yet very common, including putting forward a typology of philanthropists that aims to describe the journey many take towards becoming a “systems” philanthropist. The typology is also available also as a one-page chart here.

This report is the first-ever global effort to bring together the voices of those seeking to fund systems change with those who are delivering it on the ground. Silvia collaborated with Ashoka, Catalyst 2030, Echoing Green, McKinsey, the Schwab Foundation for Social Entrepreneurship, the Skoll Foundation, and SystemIQ, to jointly author and put forward a joint point of view on funding for systems change.

What does it take to get philanthropy right, particularly when we care about enabling enduring impact at scale? The Co-Impact Handbook seeks to articulate who Co-Impact is, its values, theory of change, way of working, and approach to partner effectively with others. Silvia co-authored especially the point of view on philanthropy fit for supporting systems change.

This is the most comprehensive analysis to date of global philanthropic practices and trends. The report was authored by researchers at the Hauser Institute for Civil Society at Harvard University. Silvia began discussions with Harvard about this project in 2014, funded the research from UBS, and was a key thought partner on the project. See microsite here.

A report from an exploratory study of philanthropic giving among China’s very wealthy citizens offering a new look with deep insights into growing Chinese philanthropy. Study conducted by Harvard University. Silvia funded the research from UBS and was a thought partner in discussions with the authors around distilling the key findings of the report.

A pioneering report on philanthropy and social investment by wealthy individuals in Denmark, Finland, Norway, and Sweden. Study conducted in partnership with the Swedish Entrepreneurship Forum. Silvia commissioned the report, helped to distil the key findings and wrote the opening letter.

This book looks at impact investing as a refocus of venture capital to sustain the development of societal impact enterprises. It collects chapters from international experts on the subject, discussing the foundations of the movement; analysing leading international cases; and debating future trends in the field. Silvia co-authored Chapter 13 – “Social impact from giving to Investing”.

From Prosperity to Purpose: Perspectives on Philanthropy and Social Investment among Wealthy Individuals in Latin America. Published 2015

A pioneering report on philanthropy and social investment by wealthy individuals with a focus on Argentina, Brazil, Chile, Colombia, Mexico and Peru. Study conducted by Harvard University. Silvia funded the research from UBS and was a thought partner in discussions with the researchers and authors around distilling the key findings of the report. She also wrote the opening letter.

Silvia co-authored this guide for philanthropists regarding their fundraising and resource mobilisation activities, since many wealthy philanthropists believe that finding co-funders is one of their biggest challenges. It was designed to lead them on a practical journey from asking the key question of why they wanted to fundraise and why someone would give, to developing and implementing a plan to elicit support. 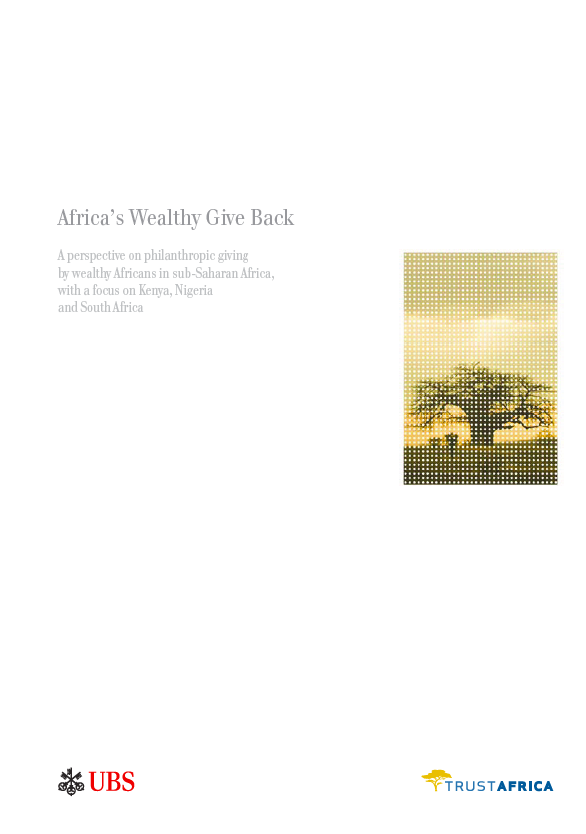 Africa’s Wealthy Give Back. Published 2014

A report on philanthropy and social investment by wealthy Africans in sub-Saharan Africa with a focus on Kenya, Nigeria and South Africa. Study was conducted in partnership with TrustAfrica. This was a pioneering report and importantly showed Africa as also a giving not just receiving continent. Silvia commissioned the report, helped to distil the key findings and wrote the opening letter.

Silvia decided to publish the UBS Philanthropy Compass, a comprehensive and guide for philanthropists whether very experienced or new to the field. She final edited this report and since publishing it has been widely shared, and further translated into six languages other than English because of strong global demand (French, Traditional and Simplified Chinese, German, Spanish, and Portuguese).